The Mountains of San Sebastian

Donostia San Sebastian is surrounded by three colossal mountains that have protected all the beautifulness of the city for centuries. Monte Urgell, Monte Igueldo and Monte Ullia have much to offer you. Centuries old ruins, breathtaking views and even the only roller coaster in the world built in a location so unique, are just a few mentions of all the things you can do here during your weekend in San Sebastian. 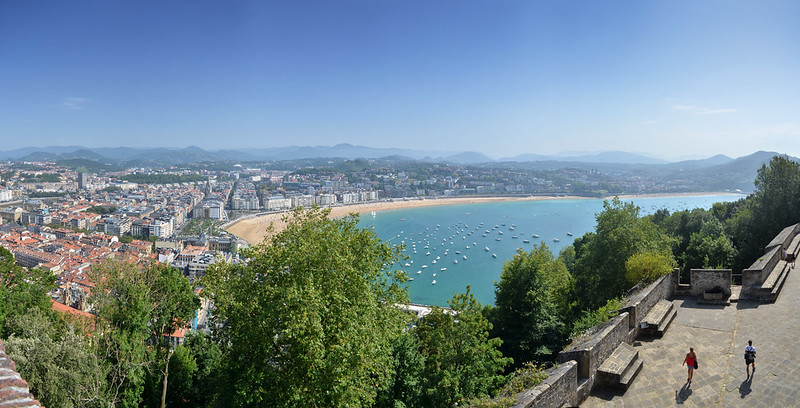 The Mountain with the giant statue of Christ, the most amazing views over the beaches of San Sebastian and the old British cemetery.

You can climb this mountain yourself to follow one of the different trails there are leading to the top. When you reached the top of the Monte Urgell there is a bar to buy a refreshing drink, believe me you will need it. After your drink, you can explore the ruins of castles that once standing upon the Monte Urgell and see the statue of Christ, who is looking over and protecting San Sebastian, from close by.

The Aquarium on the Monte Urgell is a great museum and an international benchmark in the field of research of marine life. You can see many different fishes, sharks and rays in the acrylic tunnel from close by.

Along the way you will find the Military cemetery, opened in 1924 as a memory for the British soldiers who died on the Monte Urgell in 1813.

Then there is also the free museum who tells you the story of the Basques at the top, but when you are not that into history there are benches to relax before you are going back down, make sure you take another route down to see the different panoramic views of the beaches though.

On this mountain you will find an amazing amusement park, a lighthouse built of wood in the eighteenth century and again panoramic views of San Sebastian.

There are three ways to come on top of the mountain, you can drive by car or cab, you can hike and you can go with one of the oldest trains in the country (Almost 100 years old).
The little cable train will bring you to the top and back between 10.00 and 21.00 and leaves from the La Concha Beach.

Arrived at the top you will find the Parque Attracciones Monte Igueldo. This amusement park has the most exciting way to explore the panoramic views of the city San Sebastian. Namely the Montaña Suiza rollercoaster ride. It also has Carousels, bumper cars and many more.
If you prefer to have a quiet and amazing look over the beaches, cliffs and city San Sebastian you can also watch it from the lighthouse tower.

The mountain located in the east of San Sebastian, which offers you a gorgeous view from the other side of the city and beaches. One of the most romantic mountains with all the old ruins of the past.

At the top of the mountain there are centuries old whale watchers points, where they used to watch out for whales passing off the Basque. Nearby you will find the old steps of a tram used back in the beginning of the 20th century, stone skeleton of the rural house and some walls of the hotel restaurant once standing there. By walking along all these beautiful ruins, you really go back to the beginning of the 20th century.

After visiting one or of course all of these mountains, you will know more about the Basques, you will have the most amazing views of the beaches of San Sebastian on your camera and you had the most excited trips by train or rollercoaster up and down the mountain.

What are you waiting for… the train to Monte Igueldo is only a few minutes away from Hotel de Londres!

I hope you have a great experience during your stay in Hotel de Londres y de Inglaterra and enjoy your time in San Sebastian.
If there is anything we can assist you with please do not hesitate to ask our staff.